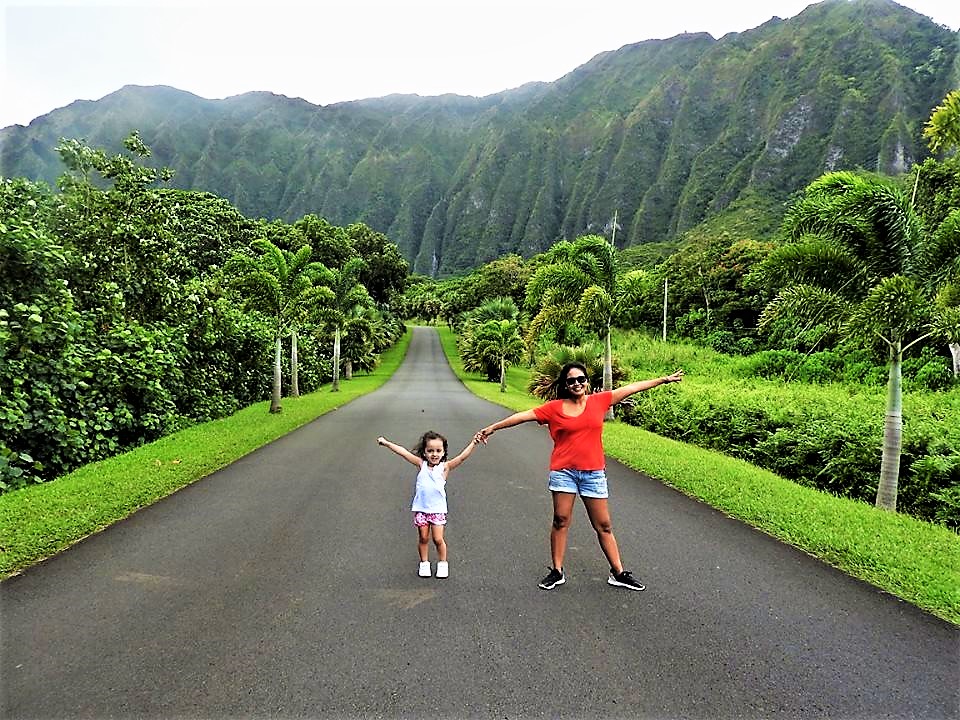 Hawaii is the most beautiful tropical place on earth. The Hawaiian archipelago is about 3,200 kilometers from the coast of the United States. We visited Oahu, the most cosmopolitan and beautiful island. Eighty percent of Hawaii’s population lives on Oahu. There are plenty of places and incredible beaches to visit. The island is relatively small and it has good infrastructure. Waikiki is one of the most iconic beaches in the USA, with dining and nightlife area. West of Honolulu is Pearl Harbor famous for the 1941 bombing attack and home to the USS Arizona Memorial.

Hawaii, the most beautiful tropical place on earth

Exactly one year after my adventure in New Zealand, mom Nerissa and dad Giuseppe took me to another faraway place, This time it was Hawai’i in the United States of America. We flew to Milan the night before and the next day we flew first to Frankfurt and, soon after, we had a very long flight to San Francisco, on the East Coast of the USA. From SFO the flight to Honolulu is still a long one. In fact, only after another six hours in the sky we finally reached our destination in the Aloha State.

It was night time when we landed in Honolulu. The airport is a bit outdated and not well organized, but it is tropically fascinating. We had a rental a car at the airport and with our GPS, we had no difficulty reaching our Airbnb in Waikiki, downtown Honolulu. Prices for accommodation are not really cheap in Honolulu but we were happy with our Gloria’s Studio. We actually never met her but whenever we had a question she answered pretty fast.

Our Waikiki Studio was just a few meters from the famous beach and from the city- and nightlife of Honolulu. We also had a free parking which in Waikiki is very useful. Therefore, we would definitely recommend this accommodation:

If you visit Oahu, you will certainly be impressed by the sheer number of rainbows. They are a very common sight in Hawai’i. In fact, besides being famous as the Aloha State, one of Hawaii’s nicknames is “The Rainbow State” and a rainbow is also depicted on vehicle license plates.

The best way to visit Hawai’i is by car. We drove everywhere. We went to the North of the Island of Oahu to Keawaula Beach, a.k.a Yokohama Bay. It is an area of the Island where many homeless people live inside a car. We reached the end of the road and got out of our car to spend some time on the beautiful beach.

Out of the blue, we saw an otter swimming between two people and coming out of the water. It just wanted to get some sunshine and relax like any others. A few minutes later, a beach patrol reached out the place and cordoned off the nice otter. They said that if otter gets nervous they could even attack people and bite them.

One thing I noticed is that there are only a few playgrounds for children in Oahu and none of them could be described as nice. That is a real pity. Maybe they should pay more attention to kids. Fortunately, there are many incredible beaches in Oahu and we tried to visit them all.

Lanikai Beach, in the town of Kailua, is one of the most beautiful ones. The name Lanikai means “heavenly sea”. It is often ranked among the best beaches in the world. We also went to the beach of Waimea Bay, Haleiwa, on the legendary North Shore. The place has always been one of the best surf spots in the world and it still looks amazing.

Hanauma Bay is a fantastic beach. However, you have to pay for a ticket to visit this place but it is definitely worth it. They also showed us an interesting documentary on the marine life of the Hawaiian Islands. The beach is sandy and the sea is crystal clear and full of colorful fish. We spent a wonderful day and I found some other kids to play with the sand while my dad was in the water and my mom in the sun.

Of all the beaches. Waikiki is THE BEACH of Honolulu. High-rise hotels line the shore in Waikiki. This is one of the most iconic places in the world with a vibrant neighborhood with beachfront cocktail bars and fine dining, At the back of the beach of Waikiki, there are a number of designer fashion stores.

One of the best places to visit with children is the Dole Plantation. In fact, another nickname of Hawaii is “Pineapple State”. We drove again to the North of the Island and there we got on a little train taking us around the plantations of all different kind of tropical fruits. There, I saw with my own eyes what you could probably see only in pictures and illustrations of books.

Another great place is the Kualoa Ranch and Private Nature Reserve. It has been the setting of many Hollywood movies. The place is beautiful with the sea and the mountain facing each other. The goal of this private reserve is to protect and enhance the natural beauty of these lands while developing sustainable recreational, agricultural and aquacultural enterprises that are compatible with the environment.

During our tour of the Island of Oahu, we also stopped at Byodo-In Temple but we did not pay for the ticket. Byodo-In Temple in Hawai’i tucked away in a memorial garden, is a replica of the historic Byodoin Temple of Uji in Kyoto. Actually, we did not think that we could have seen more from the inside than we could while watching from the outside. it is an interesting place but we are not Buddhist.

The Island is not big and so you can easily get from one side to the other. During our stay, we also visited Hoomaluhia Botanical Garden. It is a free entry place, full of tropical flora and fauna and amazing landscapes.

Basically, two things inspired my dad about the Island of Oahu: the first one was Magnum PI and the second one is Hawai’i Five-0. And this second reason is why everyone knows that the most famous dish in the Island is shrimps.

So one day for lunch and we looked for the best place to eat shrimps and ended up at Giovanni’s Shrimp Truck. The name is the same as my Italian grandpa but later we found out that the original Italian owner had already sold his business. Anyway, it was worth the long drive because shrimps are really up to their reputation.

One day we drove past the famous Robin’s Nest and one other time dad wanted to see the Aliiolani Hale, the Hawai’i Five-0 Headquarters. Actually, my dad told me that on a previous trip with mom, when I was not yet born, they visited Miami for Miami Vice and San Francisco for the Streets of San Francisco!

A must visit in Honolulu is the Diamond Head Crater, an extinct volcano and a very popular hiking destination with a rugged trail leading to panoramic views. My family and I went there and it was fun for me and I did not get very tired since I asked my dad to carry me most of the time and he was so gentle to do it. The entrance fee is very small and you just pay for the parking. The view of Waikiki and the whole city of Honolulu was just magnificent.

On Thanksgiving day, we got an invitation from mom’s friend, a Filipina married to a US citizen. We had a nice dinner together and I played with their little son. They both worked at the military base of Pearl Harbor. As a matter of fact, when visiting Oahu you should not skip Pearl Harbor. That was the site of an event that changed not only the United States but the world. On December 7, 1941, the Japanese launched a surprise attack on the island of Oahu.

After this brutal attack America entered World War II. On this place, we saw huge warships and submarines but also exhibits of what really happened on that unforgettable day on the US soil. The USS Arizona Memorial at Pearl Harbor marks the resting place of 1,102 of the 1,177 sailors and Marines killed on USS Arizona during the Japanese surprise attack. The visit is totally free unless you want to get a deeper knowledge of Pearl Harbor.

On the side note, Hawaii is one of the most expensive states or even cities in the world especially the basic commodities like food, housing or shelter but shopping for clothes was comparably cheaper than Italy. We were also lucky that it was Thanksgiving so prices were marked down so Mom & Dad bought several designer jeans at a very good price at Ala Moana Center. Mom also bought a nice bag and shoes for me at the Waikele Premium Outlet.

Unfortunately, during my last days in Honolulu, I became sick and got a high fever. For that reason, my parents took me to a local clinic and they gave me the right medicaments. Therefore, after just 12 hours I was already feeling much better. We had a medical insurance policy and it is always advisable to have one, especially when traveling abroad.

Feeling much better, I was ready to go back home and there we were again after another five more flights.