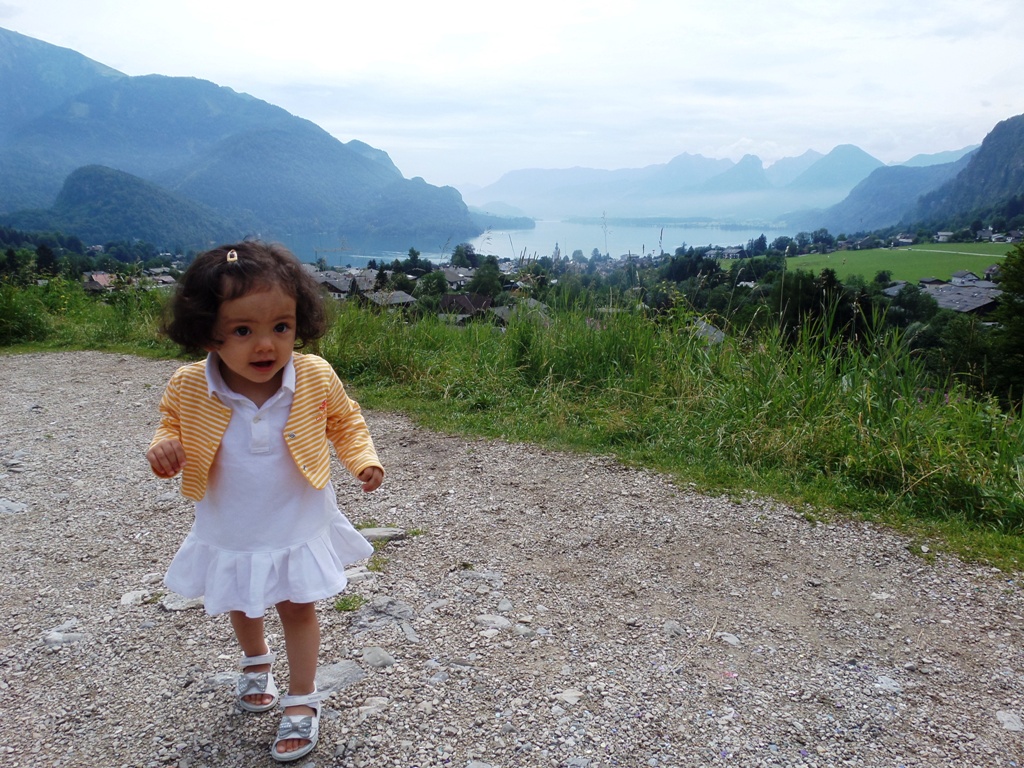 Austria: The hills are alive. Around St. Gilgen, Hallstatt, Salzburg, and Vienna

Austria is the greenest country of Europe. We visited some of the most beautiful sights of the country, from Hallstatt to St. Gilgen, from Salzburg to Vienna. Austria has wonderful Alpine landscapes with mountain villages, lakes, rivers, and a beautiful countryside. It has baroque architecture and an Imperial history. And Austria is the birthplace of Mozart, Strauss, and Freud.

We arrived in Austria at Fuschl Am See late at night, coming from Cesky Krumlov in the Czech Republic. Fuschl Am See is a little village with a beautiful lake, the Fuschlsee famous for hiking, golf and spa holidays. Since it was late spring, the lake water was still cold but during summer the lake is packed with locals and tourists.

The next morning, we headed in Hallstatt, a small picturesque village on the lake and a world-famous destination in Austria. Aside from being a UNESCO World Cultural Heritage Site since 1997, Hallstatt is also prominent for the oldest salt mine in the world. The weather was not perfect and we had some rain showers when we arrived and, because of me still a small baby, our movements were just limited. We ended walking around, admiring the breathtaking beauty of this most photographed village.

Salzburg, the birthplace of Mozart

We drove toward Salzburg choosing the route thru the countryside where our eyes were in awe with outstanding sights. All houses had manicured lawns, plus the panoramic views and landscapes were simply amazing. In fact, it reminded us of the movie, the Sound of Music, where the hills are alive. It’s all green everywhere in Austria and so clean, neat and serene.

Salzburg will remind you of a musical legend: Mozart and the Sound of Music movie. We started our tour of the historic center by foot, walking through the Mirabell Gardens, the setting of one of the famous scenes of The Sound of Music movie. Then, we walked across the Salzach River towards the Old town passing Mozart’s birthplace and Getreidegasse lane, Salzburg most popular shopping lane with several traditional businesses, clothing shops, souvenir stores, and courtyards. We continued our way to the Hohensalzburg Fortress or Salzburg Castle passing through The Franciscan Church, St. Peter Monastery and the Salzburg Cathedral which was being restored. We took the Festungsbahn funicular railway up to the castle. Well, that was my first time but as usual, I am a brave girl.

The Salzburg Castle is the most famous landmark and most visited place in Salzburg. Hohensalzburg Fortress is on the Festungsberg on top of the Baroque historical area. Furthermore, it is one of the biggest and best-preserved castles in Europe. We stayed for a few hours in the castle looking the spectacular view of the city. I had fun walking around looking for other babies like me to play with but unfortunately, there was no one so I end up playing with my stroller, pushing it around.

Before sunset, we went down and continued sightseeing. We were able to see an ongoing concert with a lot of people. It was some kind of festival I think. We were heading to the other side of the town when we strolled past the City Hall and thru the narrow streets and charming alleys with shops and restaurants. We decided to have dinner before going back to our hotel and ended up having pizza at the L’Osteria Salzburg. I liked their pizza, it was really good and my tummy was happy.

St. Gilgen a small charming village by the Wolfgangsee

The next day, we started our day early with a planned itinerary to Vienna. However, we went first a small charming village by the Wolfgangsee called St. Gilgen. Moreover, e strolled around the historic town with attractive hotels and holiday homes. Some of the attractions are the Kirche Falkenstein, a small church for pilgrimage and the Schafbergbahn, a railway up the Schafberg mountain which was featured in “The Sound of Music” movie. By the way, the mother of Mozart was born here and his grandfather worked in this town.

The imperial city of Vienna

In the afternoon, we finally arrived in Vienna, the capital city of Austria. Since we only had limited time, we concentrated our sightseeing in Vienna in the central area of the city. It was a beautiful sunny day and we could go for a wonderful stroll tour of the very best of Vienna.

We saw the Hofburg Palace, the Heldenplatz and the Austrian National Library, the Michaelerplatz, the Stephansplatz, the Vienna State Opera, the Karlsplatz (Charles Square), and the Monument Against War and Fascism. After that, we had dinner in a Turkish doner kebab before driving back to Bratislava, Slovakia, for our last night before our flight home. In fact, Bratislava offers good accommodation at reasonable prices and it is less than an hour drive from the Austrian capital.